The Last of the Cake Files.

I'm not a baker; just a mom who likes making special things for the people I love. 15 years ago my mom and I took a cake decorating class at our local Michaels store.  It was a fun experience for us and here I am, years later, still using the basics I learned so long ago.

When my daughter turned two I began my obsession with themed cakes.  I have my own little process that I use when I make a cake.  I Google search cake images, visit party sites and baking sites, and of course I check out the cakes on Coolest Birthday Cakes.com which displays thousands of homemade cakes made by moms just like you and me.

The process goes like this...I bookmark several cakes and choose elements I want to incorporate into my own creation.  I never copy a cake exactly, but I borrow ideas and mesh things together to come up with something a little different.  Occasionally I have to come up with an idea on my own but I always find something on the internet that I use as a guide to help me with my creative confection.

Here's a peek at some of the buttercream concoctions I've come up with... 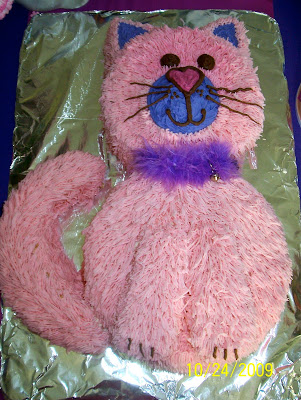 Keely's "Purple & Pink Kitty Party".  This one was tough!  Lots of carving and stacking layers to get the 3D look.  I've learned to stick to more basic shapes.  However, I will say, this cake was a big hit with my birthday girl. 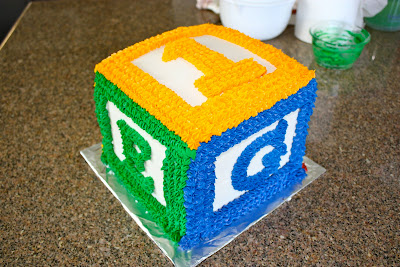 My little one, Gage, had a "block party" for his first birthday.  His name fit perfectly on the sides of the cake.  The inside was 4 layers (yellow, chocolate, yellow, chocolate). 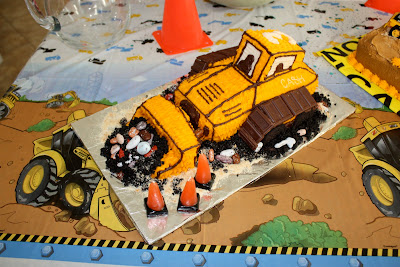 Cash really wanted a bulldozer...a bulldozer!!!  I was lucky enough to find a tutorial on-line.  I used two loaf pans for this. Thank goodness for Google! 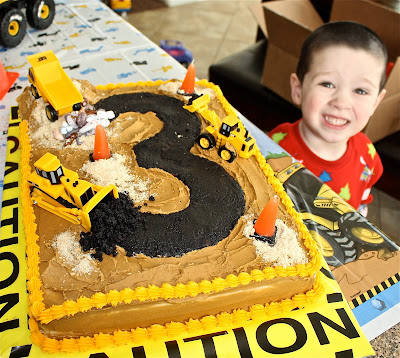 The bulldozer cake was too small for the whole family so I used the same idea as the "Cars" cake (see last post) and changed it to look like a construction site.  The kids went nuts for the Oreo road. 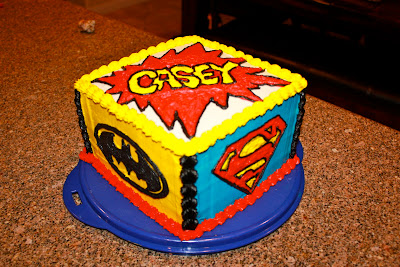 This one was a challenge! The kids' best friend wanted a superhero cake.  As if that wasn't tough enough, he wanted ALL of his favorites represented!  I went on-line and printed clipart logos for each superhero and traced them on the sides of the cake.  Then I went back and filled them in with icing. 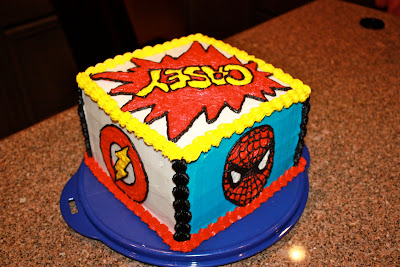 The hardest part was making so many different colors of frosting.  I really had to make a lot in advance for this cake.  Like the block cake, this was made out of 4 layers of 8 inch square cakes. 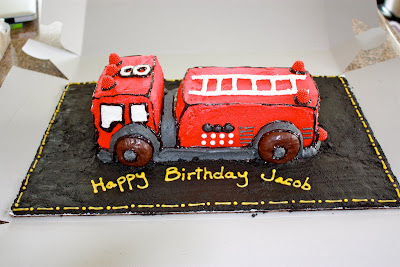 Ugh...my nephew requested a firetruck!  Thankfully I found a tutorial on-line...did I say how much I love Google?  It was not the most beautiful cake ever made, but come on;  it's a firetruck!!!  And red is such a hard color to get right! 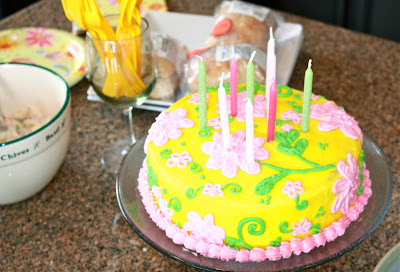 This cake was made for my mom.  You can see the plate I used as inspiration in the top left corner. 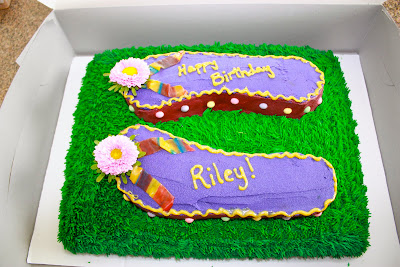 My niece wanted a flip flop cake, so she got one! I traced the flip flop shape on paper and cut it out of cake which I placed on top of a double layer cake.  Then I used one of my favorite decorating tips for the grass, Wilton #233!  This cake is another variation of the "Cars" cake.    Be prepared for a very cramped hand after all of that grass making! 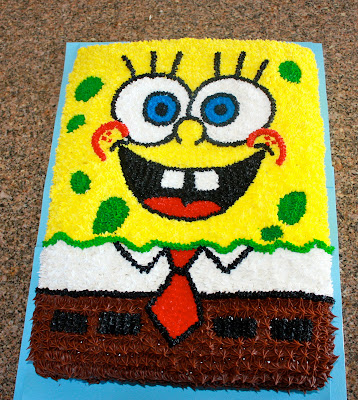 OK...Spongebob is NOT my favorite character and I don't let my kids watch him.  However their best friend was having a Spongebob party.  Let me tell you, this cake was EASY!  I just printed a picture of SB that I found on (you know where) Google.  I traced it into the crumb coat and filled it in with frosting; just like I was coloring in a book.  I used a basic star tip on the entire thing.  My hand was cramped by the end but it turned out pretty cute and the birthday boy was thrilled. 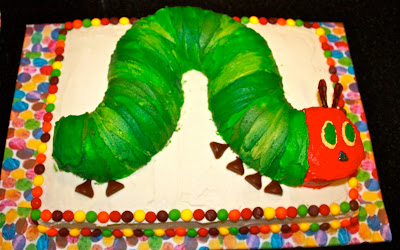 The Very Hungry Caterpillar cake.  I made a basic double cake for the bottom and cut up a bundt cake to make the caterpillar.  I used several shades of green on his body to make him look like the illustrations in the story.  His feet are Hershey Kisses cut in half and his antenna is made from fruit snacks.  I used Skittles for the borders and found Eric Carle clipart that I copied and pasted for the cake board cover. 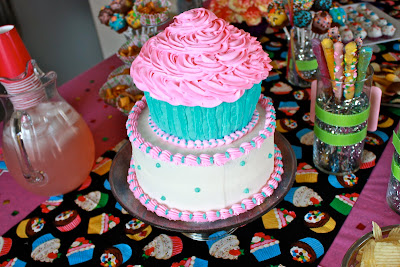 Keely's cupcake party had to have a giant cupcake!  I tried to come up with a way to carve the cupcake myself but finally gave in and bought the Wilton pan.  It was trickier to frost than I anticipated.  I learned the hard way to use dowels in the bottom cake.  This is actually cake #2...enough said about that. 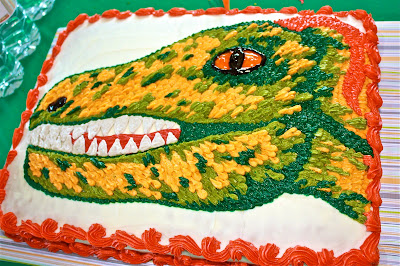 Gage's dino cake was tough.  I searched on-line but couldn't find what I wanted.  I ended up printing off a couple of clipart T-Rexes.  Then I drew them on paper to fit the scale of the cake.  Next I set my drawing on the cake and carved around it with a toothpick.  I looked at the original picture I printed and filled in the dino with yellow and green. 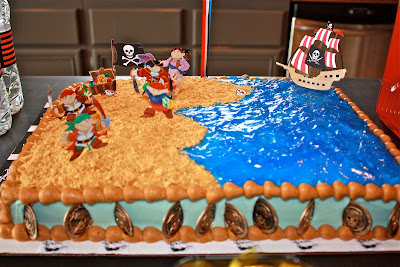 The old pirate cake!  I love making this cake.  I've actually made it 3 times for different kiddos.  It's easy to do and has a big impact on the party.  I've said it before and I'll say it again...Thank goodness for piping gel! 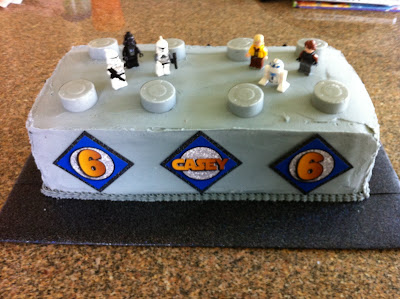 Clearly this is not a show stopper.  I did my best though.  It was for a Star Wars, Lego themed party.  A big Lego sounds easy...but let me tell you, making a perfect rectangle is tough.  Getting the buttercream perfectly smooth and having perfect edges was impossible for me.  Hey, I made it with love and luckily for me, the 5 and 6 year olds didn't care about my edges one bit. 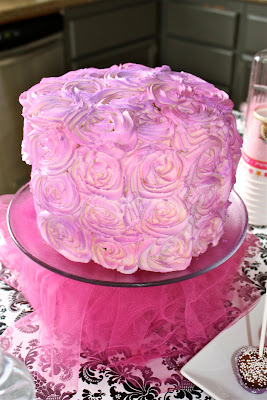 The Fancy Nancy Rose Cake.  This was fun and way easy too.  I followed the tutorial on i am baker.  This is one of those cakes that everyone loves and it really is simple to make.

All of this reminiscing about cakes makes me want to get in the kitchen and start baking!  Maybe I'll have a new cake post soon... 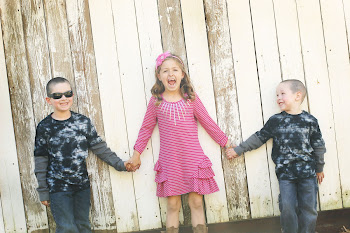